Ep 129: The Kimberleys, Urban Legends and can men suffer from postpartum depression (with Judy Wanijku Jørgensen)? 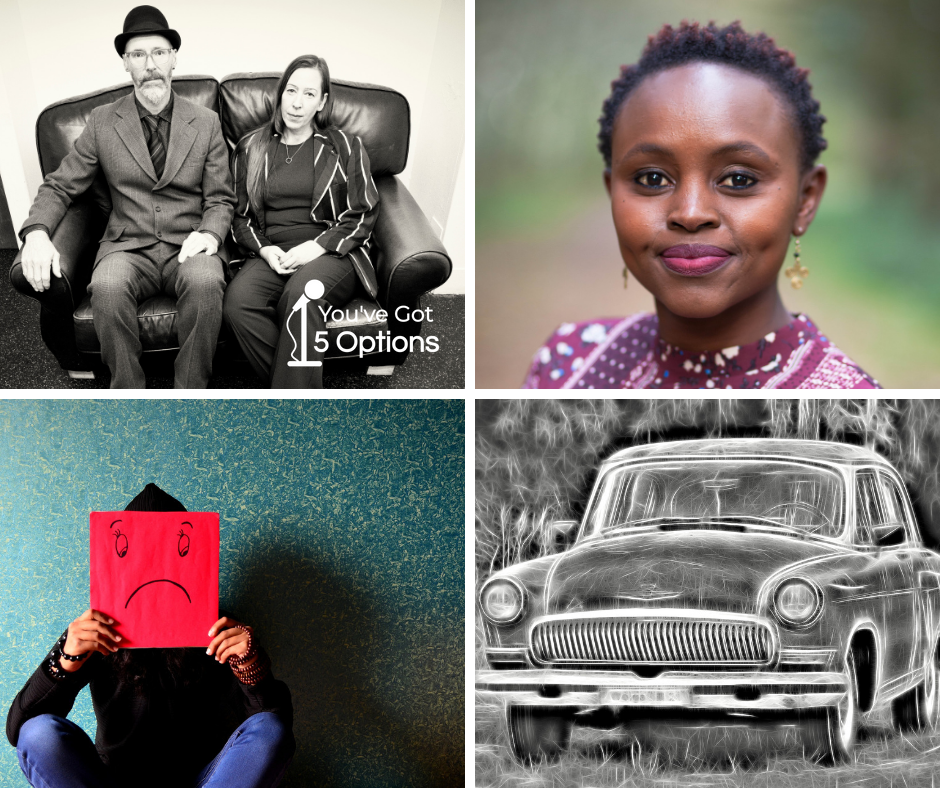 You've Got 5 Options
Ep 129: The Kimberleys, Urban Legends and can men suffer from postpartum depression (with Judy Wanijku Jørgensen)?

This episode might have started funny, but the topics we’ve discussed are definitely not a laughing matter. Join us and our friend of the show Judy Wanijku Jøregensen (aka our Queen of Vulnerability) and listen to a very important discussion about postpartum depression: How to recognize it? What to do if you have it? Where to go for help? And can men suffer from it as well (the answer may surprise you!)?

In This Episode we had:

ARTIST OF THE WEEK:

CHALLENGE OF THE WEEK:

BULLSHIT OF THE WEEK:

The depression is a flu that will not abet. Most mornings, D drags himself into the living room on all fours. He lies face-down on the interlocking foam floor tiles, his upturned arms at his sides. The baby crawls over him, tugging his hair, drooling on his t-shirts. He doesn’t move.

He complains of headaches, nausea. He has nightmares. He’s cold all the time. No, he’s hot all the time. He never sings anymore when he moves through the house. Sometimes when he walks, I swear I can hear it, the depression. It’s a liquid sound. I can hear the cortisol sloshing around in his veins. I can hear the adrenaline drip-drip-dripping down the twisted cord of his spine.

To name it, I have since learned, is fully half the battle. So I will name it here: D suffered from postpartum depression.

I will name it here because we didn’t name it then, not in those tender months after our first baby was born. We knew there was a problem — a big, hulking bear of a problem — but we didn’t call it postpartum depression. We called it up all night and not enough resources. We called it fussy baby and reflux is brutal. We called it stress and bad sleeper and babies are hard even when they’re easy. We said we were tired. We said we hadn’t lined up enough help. We said we weren’t good at co-parenting a newborn. These things were true, but there was something else, too

In hindsight, we should have seen it right away. By the time my son was two weeks old, I’d dutifully filled out the postpartum depression screening form no less than six times. In the last week, how often had I felt happy? All the time? Most of the time? Not very often? Never? Had I been able to laugh and see the funny side of life? Had things been getting on top of me? Had I been sleeping? Had I been crying? Have I been looking forward to things with regularity?

Not once was my husband asked these questions.

In men, it’s more properly referred to as postnatal depression (PND), I guess because biological males can’t technically be postpartum. Some studies estimate that as many as one in 10 men may suffer from PND. But it’s still routinely left out of medical literature on the topic.

Neither postpartum nor postnatal depression has its own listing in the DSM-V (the definitive resource for psychological diagnosticians). In order for a diagnosis to be made, the sufferer first must meet all the criteria established for a “major depressive episode,” and then meet the qualifier that the depression begins during pregnancy or in the first four weeks after delivering a baby.

This, of course, leaves no official recognition of non-birthing parents who suffer from postnatal depression.

WISDOM OF THE WEEK:

“Here is my postpartum confession: I hated him.

I hated D so much I could barely look at him. This snivelling, mushy annelid. Didn’t he see me? Look what I was doing. I, too, was parenting a fussy newborn. I, too, was working a stressful job. I, too, was pushing aside exhaustion to care for our baby. Only I was doing it more! I was up all night. I was using what precious energy I had to convert calories into breast milk. The baby wouldn’t drink from a bottle, or a syringe, or a spoon, or the fancy supplemental nursing system the lactation consultants swore would work, so I was doing Every. Single. Feeding. I was doing it amongst wildly fluctuating hormones and thyroid numbers that, three months after the baby’s birth, still weren’t balanced correctly. I was doing it with fresh stitches, with aching breasts, while actively bleeding. But I was doing it!”

FROM THE LEFT WEEK:

About The Artist of the Week:

Isobel and Jim Kimberley have been professional musicians for decades. Having built up an international reputation with their original material under the name of BRUISE they had the honour of working with some exceptional folk heroes such as Dave Swarbrick, Andy "Toppette, Blowzabella, Leverett" Cutting and Gordon Guiltrap. Having won awards for their collaborative work, production and arrangements with these well-known artists they recorded and released their first traditional folk album under the name of "The Kimberleys". Their first album was voted one of the top ten folk releases of 2018, the video that accompanies Tam Lin won the peoples choice award from Sky arts channel "Keep it Country".

Virtuoso instrumentalists and great folk singers, Isobel and Jim Kimberley are constantly touring throughout the UK and Europe.

Where to find The Kimberleys?

Song of the Week:

“Tam Lin” by The Kimberleys

You’ve Got 5 Options is a talk-show based Radio & TV Program, where we discuss ordinary topics in an extraordinary way. Inspired by the idea that every challenge has 5 solutions, every transformation process has 5 steps and every great interview has 5 key questions, we have chosen FIVE as a common theme for every program we broadcast.

If you want to learn more about us, please don't hesitate to visit our webpage at https://the5options.com

You can also listen to us on Mondays & Wednesdays at 11 30 CET, and odd Fridays at 14 00 CET and 98,7 FM in Denmark or worldwide here: http://radiohuset.airtime.pro